Showing posts from March, 2020
Show all

Now is your time to shine

March 23, 2020
There is no question that this is an unprecedented time for leaders. They are being asked to make decisions that no one has had to make before. There simply are no game plans or rule books on how to keep an organization motivated when an entire society has to essentially shut down for an indefinite period of time. But here’s the thing. Crises, and challenging times, are when good leaders shine. They’ve taken the time to build trust with their teams. They get input from as many people as they can. They think through proposed solutions. When they decide on a course of action, assuming there is time, they explain the course of action to everyone and why they chose it. No, not everyone is going to agree with them BUT, because they took the time to build that trust with their people, they’ll trust them. During any crisis there will be two kinds of leaders - “ because of ” and “ in spite of ” - leaders. “ because of ” leaders focus on why they CAN’T succeed during the crisis. “ in spite
Post a Comment
Read more

Questions to ask when introducing change

March 13, 2020
What IS the change? Self-evident but you should be able to clearly and concisely state the change in a short sentence. Who is responsible for leading the change? Not only who is responsible for leading the change but who will be doing the actual work as well. What does success look like? Probably the most critical thing to define. If you can’t objectively define what success looks like then people will become frustrated. Who is impacted by the change? Some changes impact primary, secondary, and tertiary groups of people. It’s important to understand EVERYONE that will be impacted by the change. How will we know when we’re successful? This is similar to #3 but more related to the overall organization and the overall change. Who needs to be trained; and on what? Consider creating a training plan to make sure everyone gets trained so that you have a record of it. Also consider refresher training just before going “live” in case the change has taken a while to ac
Post a Comment
Read more

Have you made a mistake today?

March 13, 2020
Jennifer I. Lim, actress and author, has a quote I just stumbled across today. “ Mistakes are proof that you are trying. ” I LOVE THAT! If you keep doing the same things you’ve always done - you’ll keep getting the same results you’ve always gotten. If you want to grow, then you need to try new things, or try doing things in a new way. Thomas Edison allegedly made 1,000 mistakes before he invented the light bulb. It’s not that he made mistakes, it’s that he persevered. Abraham Lincoln made mistake after mistake, suffered failure after failure, until he was finally elected President of the United States at a pivotal point in our country’s history. He persevered and, as a result, secured his legacy as one of this country’s greatest Presidents. So get out there and make a mistake today. And keep making mistakes until you’re a success!
Post a Comment
Read more

March 13, 2020
Understand something, you don’t really grow until you realize that other people are not, and never have been, your “competition”. Dana Lamon  was a keynote speaker at one of our District Toastmaster conferences. He said something that has stuck with me to this day. “ Don’t BE the best, DO your best. ” What I took from that is not to worry about whether or not I’m “better” at something than those around me. All I need to worry about, all I can control, is whether or not I’m doing the best possible job that “I” can do. Are you being the best possible you that you CAN be?
Post a Comment
Read more

4 Tips to being a Good Leader

March 13, 2020
I’ve said before that leadership, at its very core, isn’t that difficult. It’s having a vision of where you’d like to go and being able to communicate that vision to others so that they buy into it. With that in mind, here are four tips to being a good leader. Delegation As a leader you have a lot on your plate. You should make it a priority to delegate EVERYTHING that you don’t absolutely, positively HAVE to do yourself. This doesn’t make you lazy. This doesn’t mean you’re trying to get out of doing your job. As a leader, your job is to make decisions, to make sure your team is doing their jobs. Your scarcest resource is time. Delegating that which you don’t HAVE to do, frees up time to do the things you must do. Not only that, it helps build new leaders by giving them greater responsibilities. Communication Communication is probably the most important part of being a leader. Your team wants to do a good job for you. In order to do that, they need to know exactly what it is you expect
Post a Comment
Read more

Don't be afraid to fail.

March 13, 2020
Maybe you haven’t achieved the success at work, diet and exercise, or in your relationships, that you’d like. If that’s the case, then you need to try something new. The challenge is that trying new, unfamiliar things, carries with it the possibility of failure. No one LIKES to fail. Everyone WANTS to succeed. Failure doesn’t have to be a bad thing. Failing doesn’t make you any less intelligent. It doesn’t make you any less capable. It doesn’t make you a loser. It simply means you tried something and it didn’t work out. Move on and try something else. History is filled with famous “failures”. It took Thomas Edison over 1,000 attempts to make a light bulb that worked. Have you ever looked at Abraham Lincoln’s list of failures? 1831 - Lost his job. 1832 - Defeated in his run for the Illinois state legislature. 1833 - Failed in business. 1835 - His sweetheart died. 1836 - Had a nervous breakdown. 1838 - Defeated in his run for Illinois House Speaker. 1843 - Defeated in a
Post a Comment
Read more

March 13, 2020
To find out, ask yourself two questions. Today’s tip comes from an article in the Harvard Business Review. Peter Bregman’s son was a downhill skier. His son complained that he always seemed to finish up solidly in the middle of the pack. Mr. Bregman was an executive and leadership coach. He coached skiing on the weekends and had been a ski racer himself at his son’s age. He didn’t give his son any advice right  then and there. We’ve all been there. At that moment, when we haven’t achieved what we thought we could, what we really need is a hug and to know that someone loves us, not to hear how we COULD have won! Later though, after the disappointment had worn off. Mr. Bregman talked to his son and asked him how he felt about the race. “I never get in the top 10.”, he complained. Mr. Bregman then asked his son two questions. Two questions that can help YOU decide if you want to get better at something. Do you want to do better? Are you willing to feel the discomfort of puttin
Post a Comment
Read more 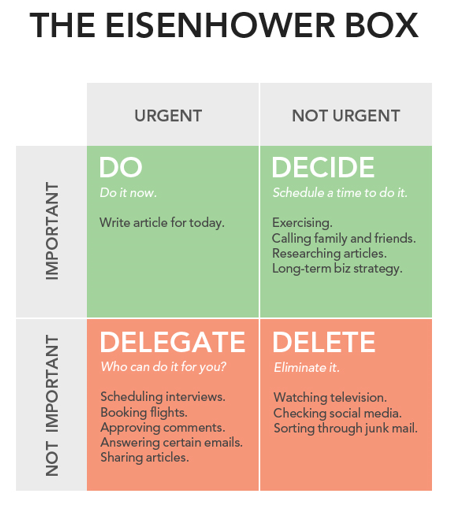 General Dwight D. Eisenhower was the 34th President of the United States, serving 2 terms from 1953 to 1961. Before that General Eisenhower was the 5-star Army Supreme Command of Allied Forces in Europe in World War II. He planned the invasions of North Africa, Sicily, and France. At other points in his life he served as the President of Columbia University and was the first Supreme Commander of NATO. Yet he also found time to pursue hobbies like golfing and oil painting! I think it’s fair to say that he was a productive man! And it should come as no surprise that his time management, task management, and productivity strategies have been studied by many people. Perhaps his most famous productivity strategy became known as the Eisenhower Box (or Matrix). I realize that you may not be founding a new government agency, revolutionizing some technology, or planning an armed invasion (You’re not - are you?), but you can still use the general’s simple decision-making tool right now. H
Post a Comment
Read more

March 13, 2020
It’s easy to be overwhelmed when you’re in charge. The buck stops with you. Everyone wants to ask you what to do. You have a report that’s due at work and your spouse and children all want your attention. Instead of giving up, just tell yourself this: “Just 5 more.” Maybe it’s 5 more minutes. Maybe it’s 5 more pages of the chapter you have to read before tomorrow’s test. Maybe it’s 5 more emails before you shut down for the evening. Whatever it is - 5 more of it doesn’t sound impossible. 1 or 2 more? Too easy. 10 more? Too depressing. 5 more seems to hit the sweet spot. It pushes you just a l-i-t-t-l-e bit beyond your point of frustration and helps you build mental concentration. So, this week, when you want to stop exercising, try 5 more minutes. If you get depressed by the thought of cleaning out the refrigerator, clean out just 5 more items. Once you get going, you’ll probably find your second “wind” and keep going but - shhhhh - don’t tell yourself that, it’s just our little secret
Post a Comment
Read more

March 13, 2020
When things aren’t going quite as we want, we have to be careful not to fall into the BCD trap. BCD stands for: Blaming Complaining Defensiveness Blaming  indicates that we’re not willing to take responsibility. We think it’s always someone else’s fault that things didn’t go right. Complaining  makes us inefficient and just plain irritating to be around. I’m willing to bet you have people in your lives that do this all the time. Don’t become one of them. Defensiveness  reveals our egos and our weaknesses. We’re humans and we make mistakes. It’s okay to admit that we’re wrong. Trust me - your team will respect you more for admitting you made a mistake than trying to cover it up and pretend you’re perfect. So don’t  Blame ,  Complain , or be  Defensive  - just fix the issue and move on.
Post a Comment
Read more

March 13, 2020
In my previous post I talked about the E + R = O equation. Events + how you Respond to them = the Outcome you experience. There are some things you can do to affect your Response. They’re called R-Factors. Pause. Stop and think, “ What does this situation require of me? ” Get your mind right. Think about what you REALLY need to focus on. Be aware (and intentional) about how you talk to yourself. Ditch the “ Oh woe is me. ” self-talk and replace it with, “ How can I turn this to my advantage? ” Step up. Understand the situation, be clear about what is expected of you, then respond. Act with intent - not impulse. TRAINING IS THE KEY! You often hear that someone “rose to the occasion”. That doesn’t happen! You rise to the level of your training. In the heat of the moment, it’s too late to train or build the needed skills, You HAVE to revert to your training. Adjust and adapt. If what you’re doing isn’t working - change what you’re doing. Don’t blame the “E” (
Post a Comment
Read more
More posts